The Rise and Fall of the Saint Patrick’s Battalion

Today, March 17, is Saint Patrick’s day. Saint Patrick played a major role in the Mexican-American war as the symbol for many disaffected immigrants who deserted to join the Mexican Army during the war. Some of the fiercest battles of the two-year conflagration were fought between the army of General Zachary Taylor and those who left it to form the Saint Patrick’s Battalion. 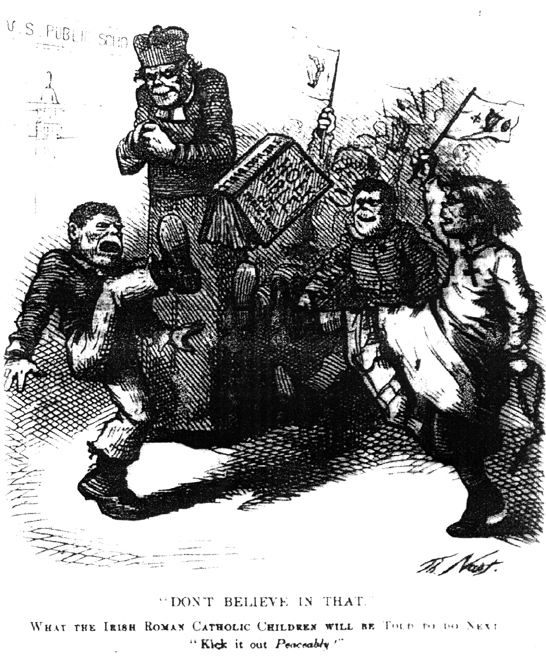 Well after the 1840s, disdain for the Irish and their religion lingered among the American people.

Anti-Catholic sentiment was prominent in early America. Some Colonists even disfavored independence because they thought it would lead to greater Catholic influence. During the late 19th century, the cartoons of Thomas Nast showed opposition to Irish immigration for the same reason. Samuel Morse, the inventor of the telegraph, also had a virulent hatred of the Catholic Church, arising from a bad experience in Rome in 1830, which he used his communicative powers to spread.

Right in the middle of this period of zeal against “popery” was the time of James K. Polk, which even saw a political party based on Anti-Catholic principles, the Native American party (political parties based on specific issues in this manner cropped up frequently before the civil war, such as the Anti-Masonic and Free Soil parties).

In 1845, there was a perception of a fearful increase in Popery in the United States, due to immigration from “the popish countries in Europe.” The Catholic population was around 1 million, out of a total population of about 20 million. Most of the Catholics in the United States were Irish immigrants; Irish immigration increased due to the Great Famine in Ireland that occurred just before the Mexican American War. While many Irish immigrants enlisted in the U.S. Army, they did not have a particular affinity for the nation, and it cared not much for them.

John Riley and the Beginnings of the Saint Patrick’s Battalion

The Great Famine displaced many Irish, mostly to the United States.

One immigrant who caused some trouble for the United States, perhaps as much trouble as the entirety of the Mexican Army, was John Riley. He came to the United States in 1843 after declining fortunes in Ireland, settling in Michigan. He had previously been an officer in the British Army, and didn’t have much of a trade besides that, so he enlisted in the U.S. Army in 1845.

You may recall that things were getting heated around the Mexican border in 1845. For one thing, the U.S. and Mexico could not agree on a border, and the annexation of Texas only aggravated the tension. As such, President Polk sent Zachary Taylor with what would become the Army of Occupation to the Rio Grande in order to enforce the river as the Southern border of the country. John Riley was a private in that army.

Dissatisfied with his treatment in the army and the general prejudice against Catholics prevalent in the country, Riley defected to Mexico. While the war had not started yet, it was no secret that hostility would soon erupt. In Mexico Riley saw the opportunity to fight against the injustice he saw in the U.S., while likely being better accommodated, as Mexico was a Catholic nation. He was enlisted at Matamoros as a Lieutenant in the Mexican Foreign Legion. 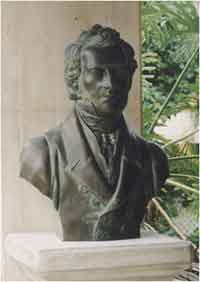 Riley was not the only one to defect; once the war started a movement of fellow Catholic immigrants joined him. Most of them were Irish, some German, others from Europe, and even a few escaped slaves from plantations in Texas. These deserters, most of them unified by language, culture, religion, and a common contempt for the United States, joined the Foreign Legion with Riley, what was to become the Saint Patrick’s Battalion. Propaganda was distributed by the Mexican Army calling Catholic soldiers under Taylor to desert, appealing to their common faith with remarks like “abandon those ranks to which you should not belong.”

In addition to the religious connection to Mexico, many Irishmen had fought for Latin American Independence in the previous generation. Some important leaders in the revolutions, such as Bernardo O’Higgins, one of Chile’s founding fathers, and Daniel O’Leary, who served under Simon Bolivar, were of full or partial Irish descent. Daniel O’Leary’s son, Santiago O’Leary, served as a Captain in the Saint Patrick’s Battalion. 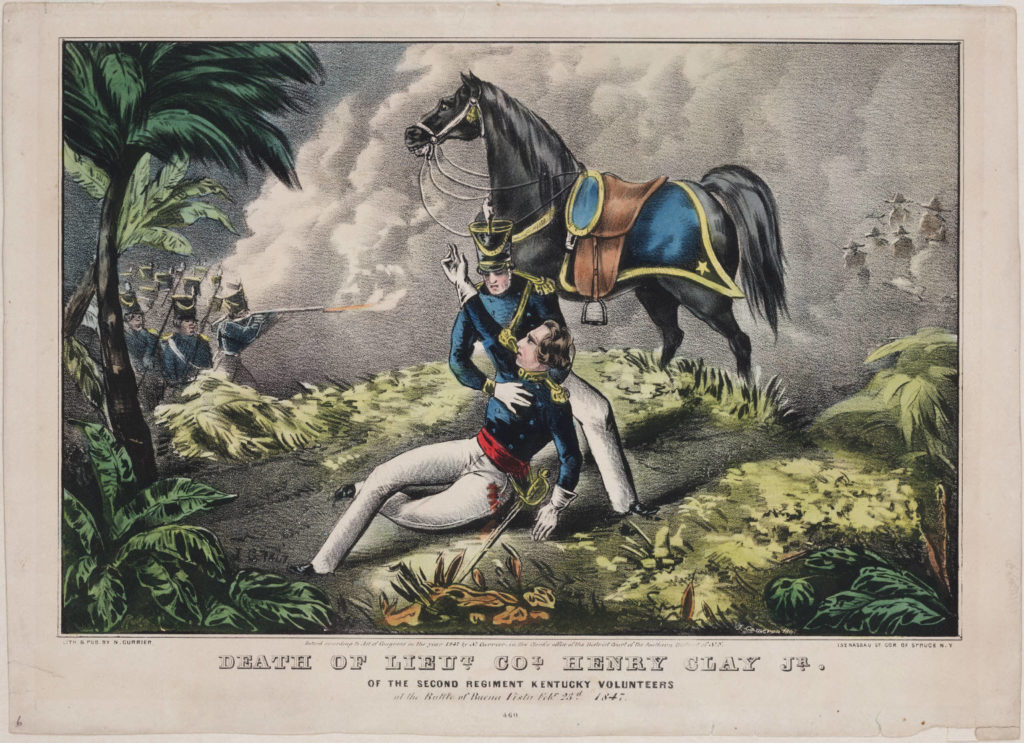 The Death of Henry Clay Jr.

Surely enough, war broke out along the Rio Grande on April 25, 1846, and the defectors were quickly mobilized. In May they fought in the Battle of Palo Alto and the Battle of Resaca de la Palma. Both were defeats for Mexico, giving the American Army of Occupation momentum for their invasion.

Initially a loose camaraderie of Irish soldiers in the Foreign Legion, they were officially organized into a battalion in the Summer of 1846, fighting their first battle as a unit at Monterrey in September. Taylor’s army won here too, giving the U.S. a firm foothold in northern Mexico. Despite the defeat, the battalion did not suffer heavy losses, and demonstrated their competency as an artillery unit. They repelled a few advances against the city, though ultimately being unable to defend it against superior American horse artillery.

After this battle, the Saint Patrick’s Battalion was merged with Santa Anna’s army and proceeded to fight at the Battle of Buena Vista. This was, perhaps, the height of the battalion’s performance. As an artillery unit they inflicted much damage to the U.S. Army; in an American cavalry charge attempting to eliminate the nuisance, Henry Clay Jr., son of the famous politician, was killed, devastating his father. The rest of the Mexican Army at this battle did not fare so well, but the Battalion did a good job covering their retreat.

The next major engagement for the Battalion was the battle of Cerro Gordo, which was yet another defeat. Then, they went on to face their fate at Churubusco during a retreat southward.

The Last Stand of the Saint Patrick’s Battalion

At the Battle of Churubusco, the Battalion ended up surrounded in a Franciscan convent, fighting desperately. They fired their cannons so rapidly that the barrels melted, making them unusable. Most of the Mexican Army, including Generalissimo Santa Ana, lived to fight another day (though not many more after that), but some Mexican soldiers were trapped alongside 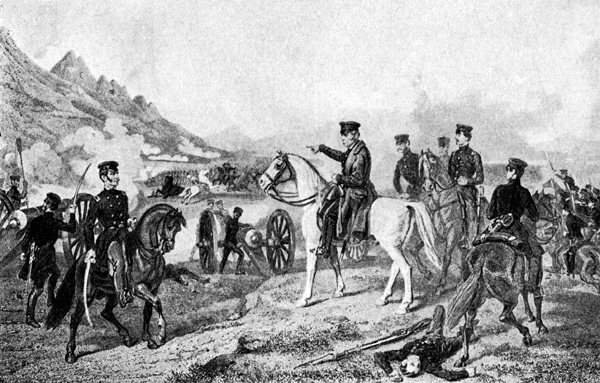 The Battle of Churubusco

the Battalion in that fatal battle. Once it was evident that there was no hope of victory or retreat for them, the Mexican soldiers tried to surrender so that their lives at least would be spared. This did not bode well with the Irish, whose lives, as deserters, would likely not be spared in the event of surrender, facing court-martial and execution. They tore down the white flag three times as the Mexicans tried to raise it.

John Riley, the man who started all of this, was with the rest of his regiment in that convent. One can only imagine what he was thinking in that moment, trapped in a place dedicated to the faith for which he had risked his life, in a strange country across the sea from his desolated homeland, and now seemingly was bound to lose it.

After much effort, the Americans under James Milton Smith took the convent, making surrender inevitable. Naturally, the traitors were executed.

That is, almost all of them were executed; all but three. One of them had never actually properly enlisted, another was determined to be insane, and the third was none other than John Riley himself. Riley had been the first to desert, leaving the army in April, a few weeks before the war began. Desertion in that case was not a capital offense since it was not during wartime that he forsook the army.

He was nevertheless severely punished, as desertion is always inexcusable, no matter whether in war or peace. A “D” for “deserter” was branded on each of his cheeks; the first time

upside down, by accident. Once his sentence of hard labor concluded, he returned to the Mexican Army, promoted to Brevet Major, serving until 1850, when he was discharged due to Yellow Fever.

The details of his life after leaving the army are disputed. There is evidence that he could have died shortly thereafter; the death certificate of a “Juan Reley” dated 1850 in Veracruz, the city where he was discharged, states that the man died of drunkenness and had recently committed a robbery. The image of the Irishman dying, impoverished, resorting to crime and drowning his sorrows in alcohol after losing every battle, having his every hope frustrated, is almost irresistible. A fitting end!

It is, however, almost certainly inaccurate as it is at variance with the attested character of Riley during the war, who deserted partly for moral reasons and was known for his sobriety, as well as with the fact that Riley was awarded a generous pension after being discharged.

John Riley and his battalion are today honored as heroes in Mexico, and largely forgotten in the United States, to whom they were not quite troublesome enough to remember.