The Great American Desert: What, Why, and How?

CONTENTS hide
1) What is the Great American Desert?
2) Why did the United States want a vast swath of largely unexplored and mostly uninhabited territory in the Southwest?
3) How did we acquire it?

What is the Great American Desert?

Rather than being a region unified by a certain common climate, as “desert” is usually taken to mean, the term “Great American Desert” in the early 19th century referred to a vast swath of largely unexplored and mostly uninhabited territory in the Southwestern United States; what was then Northwestern Mexico. 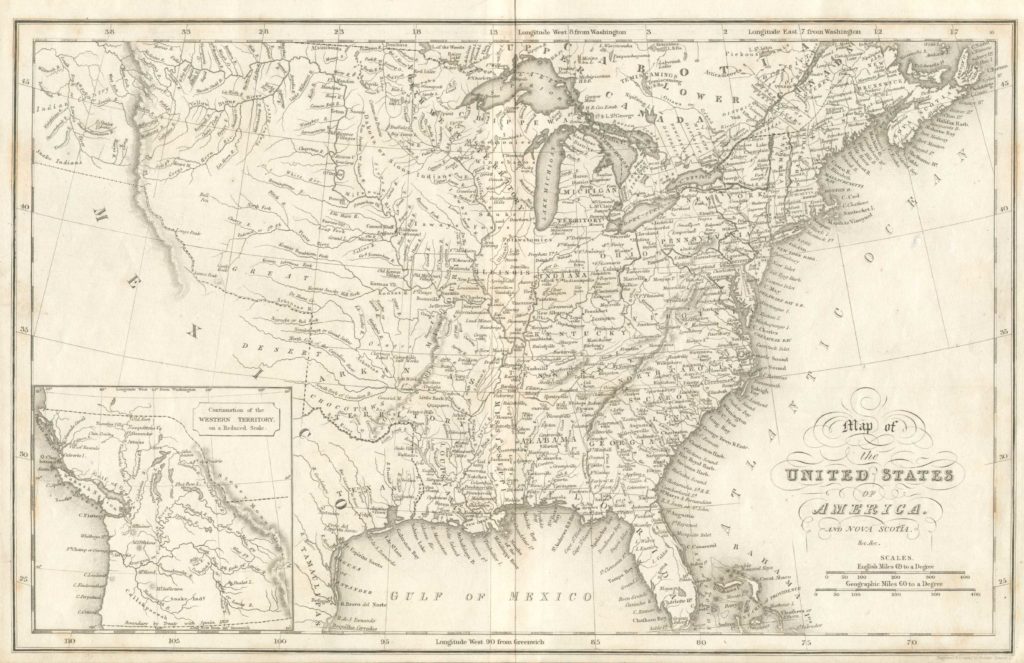 Note the large blank space labelled “Great Desert” on the left of this otherwise accurate map.

It was thought to be entirely deserted and barren; no good for cultivation like the fertile Oregon country to its north. Most of the region is, in fact, deserted and barren, including the Sonoran and Mojave Deserts, as well as the Sierra Nevada and Rocky Mountains.

The exact boundaries are vague; whatever a cartographer didn’t know, from Texas to California, he would label as the “Great American Desert” or something similar. Very few crossed the desert before the developments of the 1840s, and most Americans to see the west coast arrived by boat. There was no reason to make the journey through a land where prospects were poor and the only humans to be encountered were hostile Indians. By the end of Polk’s term as president, that was no longer the case.

Why did the United States want a vast swath of largely unexplored and mostly uninhabited territory in the Southwest?

The United States wanted to expand westward, this is known; the young nation had an inexorable pioneering impulse and the neighboring territory was the best place to immediately satisfy it. But we had already gained much western land in the Louisiana Purchase of 1803, most of which was much better land for cultivating than the desert, so why would we want an area belonging to Mexico that had not much apparent potential for settlement?

California was the primary rationale for acquiring the Desert. Not just the U.S. State of today (what was then Mexican Alta California), but Baja California as well. The West coast was known to be very fertile, but it was hardly settled at all. The Mexican government had squandered its valuable possessions in that region, mostly because they lacked the political stability and organization to arrange for it to be settled. Mexico was in a state of almost constant revolution during the period from their independence in 1821 until Porfirio Diaz took power in 1876. The American government, on the other hand, had been pursuing a constant policy of expansion and settling new lands, while not suffering from the same turmoil.

As such, the United States was likely to benefit much more from California than Mexico did, and we needed to have a reliable overland route to travel there; the voyage by sea around Cape

The sea route to California before the Panama Canal. This was the only option before the Great American Desert came into our hands.

Horn being unfeasible for transporting a consistent flow of settlers. So if we were to have California, we needed to have the desert that stood between it and us as well.

How did we acquire it?

Most of the “Great American Desert” region was obtained by the United States in the Treaty of Guadalupe-Hidalgo after the Mexican-American War. The story of how the arrangement in the treaty came to be procured is quite interesting.

Nicholas Trist. His conduct drove Polk to write privately that he was “a very base man.”

Nicholas Trist, the State Department clerk whom Polk appointed to negotiate the treaty in Mexico, was a stubborn, garrulous man. During his journey southward he got into a number of spats, notably with General Winfield Scott, causing trouble in the ranks of the occupying army. After receiving complaints about the legate’s behavior, Polk recalled him to Washington and revoked his power as negotiator. However, Trist had already started negotiating with the Mexican government and didn’t feel like returning.

When Polk sent Trist to Mexico initially, the diplomat was instructed by the president to secure New Mexico, California, and Baja California, offering Mexico 20 to 30 million dollars in compensation. The treaty he signed gave Mexico 15 million dollars, which he felt was enough money saved to forego Baja California. As a result, the United States had a grand desert in its possession, but not as much benefit as hoped for, since it was apparent that we would not be establishing settlements in Baja California.

Polk could have refused the treaty that landed this deal, Trist’s signature no longer being binding since his powers had been revoked, but he accepted it nonetheless. Baja California was inessential, the land acquired still yielded great prospects, and the country had to pay $5 million less than expected. Also, Polk did not want to go through the whole process of negotiating the treaty again, as a decently favorable agreement had already been reached. So the treaty was ratified, and the United States of America secured possession of its great southwestern desert.