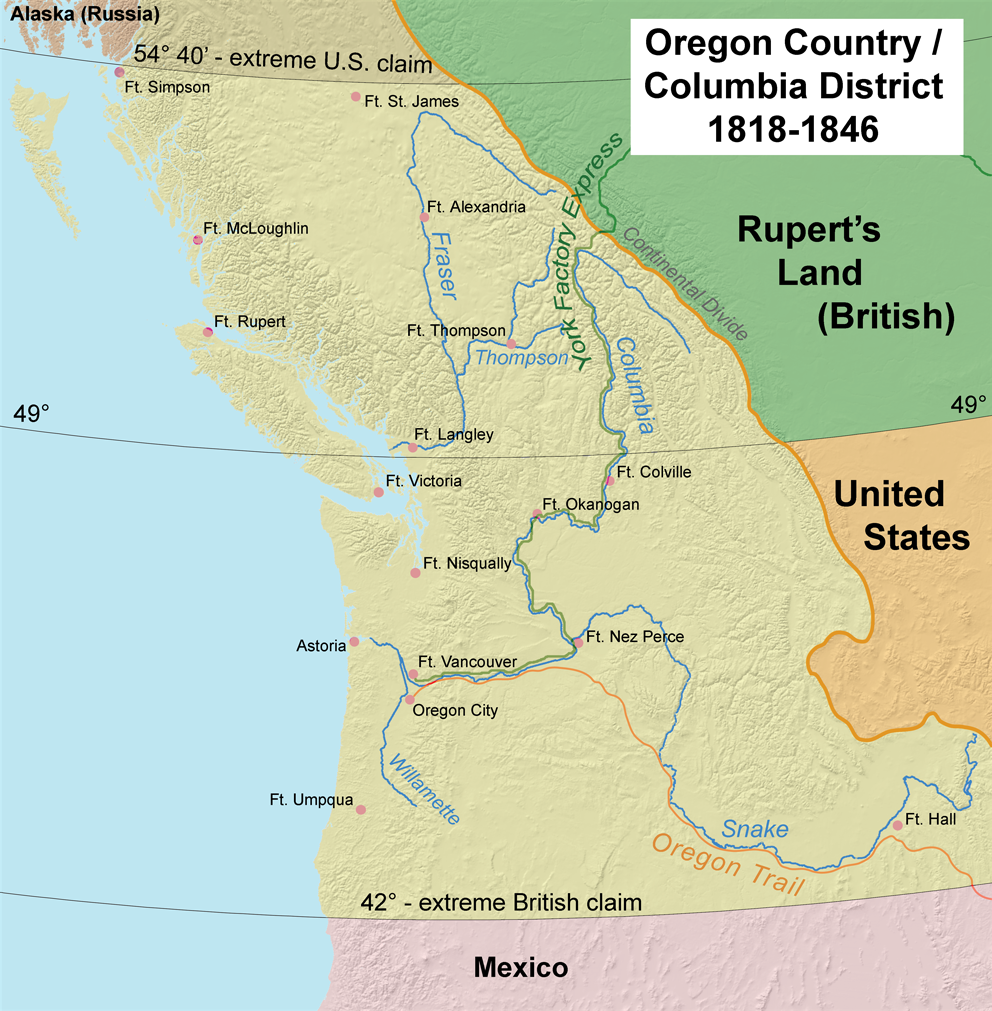 The Young United States’ first territory to border the Pacific ocean was the Oregon territory in the Northwest. But it did not come without struggle; the disaffected British Empire would not pass up a chance to block the expansion of their former colony. Both countries, the US and Great Britain, claimed rightful ownership of the territory. Polk put a stop to this madness; one major achievement of his was settling this dispute, paving the way for a more tangible kind of settlement. We will cover his handling of the issue and the border treaty at a later date, but first we must evaluate the legitimacy of each country’s claims.

On September 15th, 1513, conquistador Vasco Núñez de Balboa clambered to the summit of a mountain of the Darien Range in what is now Panama. He gazed in awe upon

the horizon and spotted to the west a vast ocean, the end of which was inconceivable. The conquests of the Aztecs and Incas were barely underway, but there was a strange sense of fate present in those waves: Spain was destined to rule them.

Over three hundred years later, as the Spanish imperial dream was crumbling, they signed away every right to land on the west coast above California to the United States of America.

Balboa labeled his discovery Mar del Sur, The South Sea, since he had traveled south along the Chucunaque River to get there from the already-established settlements of the Spanish Crown. While this triumphant moment was most certainly the climax of his career as an explorer (which would end with his decapitation in his home country not six years later), it was much more than that; it was the beginning of a long series of confusing, contentious, and contradictory claims to territory bordering this “South Sea” that resulted in surprisingly little bloodshed.

Spain initially claimed all lands in the Americas that were adjacent to the Pacific Ocean, as per the Treaty of Tordesillas, a 1494 treaty between Portugal and Spain dividing the New World between them. The treaty created a line, everything East of which was to belong to Portugal and everything West of which was to belong to Spain. This agreement was perfectly reasonable to the two parties, given they were the only European nations to have reached the New World at the time of the treaty, although they would not exercise effective control over the whole area until over 30 years later. Nevertheless, Spain was recognized by all of Christendom to control the entire West coast of the New World since the Vatican issued a Papal Bull decreeing as much, the “Inter Caetera.” Thus, the first legitimate claim to the Oregon Territory was Spain’s, and Spanish explorers were the first Europeans to lay eyes upon the territory fifty years later, in 1543.

The next major development was the voyage of Sir Francis Drake, noted enemy of Spain (dubbed “El Draque”), who sailed the farthest north along the west coast of anyone yet in 1579 during his 1577-80 circumnavigation of the earth. It is disputed how far north he actually sailed, but it is certain that it ranged from 43 to 48 degrees north. Although he established the settlement of Nova Albion in what is now California, he didn’t settle anywhere in what was to become the Oregon Territory, nor did he claim any West Coast land during the expedition, so his voyage was not a source of legitimacy for British claim to the area.

Spain once again sent an expedition to the area in the late 16th century. This time it was led by Juan de Fuca, a Greek-born explorer whose grandfather was at Constantinople in 1453. De Fuca sailed twice from California on the lookout for the Strait of Anián, a mythical strait that supposedly connected the Old and New Worlds. The first time, his soldiers mutinied before he could make significant progress to the north. He tried again in 1592, when he claimed to have found it at the 47th parallel north. He was not seriously believed, nor was he given any honor from the crown for this discovery, but he may have discovered the Strait now known as the Strait of Juan de Fuca (named that almost 200 years later) which would become part of the Oregon territory and currently forms the border between Canada and the US in the Northwest.

All of these developments were shaky, as they came at a time when the East coast of the Americas was barely being settled, so many explorers had an entire continent and an ocean separating themselves from reliable record-keeping. European ventures into the area lay dormant for about 200 years. 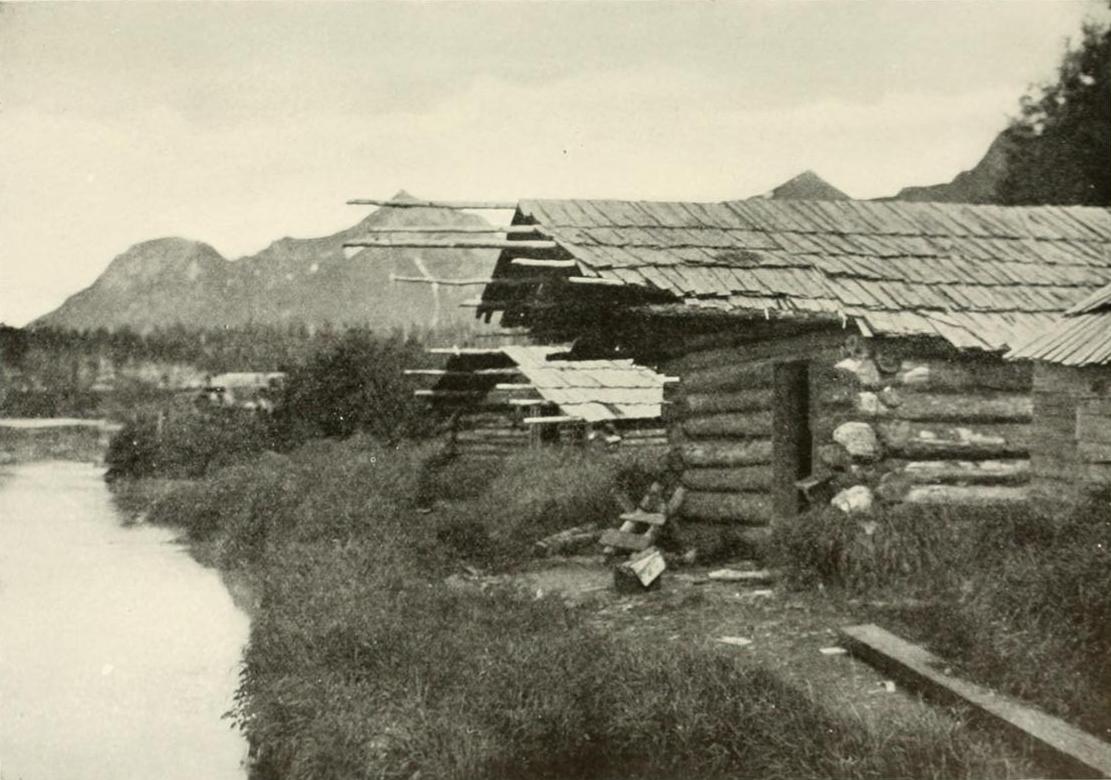 The first Europeans known to have set foot in what would become the Oregon territory were Spaniards in the company of explorer Juan José Pérez Hernández. In 1774, Hernandez was sent by the Spanish Colonial Viceroy to sail to 60 degrees North, in the hopes of establishing communication with Russian settlements. Russian presence in the Northwest of the continent began in 1733 as part of the Great Northern Expedition, a colossal project which aimed to map Siberia and Alaska. Beginning with that expedition, there had been a steady flow of Russian traders to the area

A map of North America, the strait of Anián visible in the Northwest

engaging mainly in fur trade. Hernandez did not reach the Sixtieth parallel, being inadequately supplied and turning around at 54°40′ north – sound familiar? Indeed, this is where the famous 54°40′ line was established as the border between Russian America and New Spain. Although Hernandez did not complete his mission, he did discover Nootka Sound, an important location to the conflict.

The renowned explorer James Cook surveyed Hernandez’s discovery three years later, naming it “King George’s Sound” and staying for about a month. James Hanna, a member of Cook’s expedition, collected furs which he sold at a high price, inspiring other traders to settle in the area. It was then that the first conflict about ownership of these lands began.

The Nootka Crisis of 1789 started when Spanish explorer Esteban José Martínez was instructed to build a permanent settlement on Nootka Sound by Viceroy Manuel Antonio Flórez. Martínez, loyal subject to the crown, did as he was told and quickly set sail for the location. However, upon arriving, he found several British trading vessels docked in the sound. This was an outrage to Martínez and his superiors, the Spanish government having negotiated no such agreement allowing access to their land. The British had a completely different view; because no Spaniards had been established as residents and no improvements were being made on this patch of land thousands of miles from Spain, Spain’s claim was void. I might add that hardly any land claimed by any European power in any part of the New World, especially here, was being settled and improved. Treaties such as the one of Tordesillas mainly governed the borders. Spain saw the occupation as a violation of their sovereignty, and the British saw it as business as usual. Spain’s point of view here compelled them to seize the British ships with their navy and occupy the British settlement. It seemed inevitable that the two countries were going to war for the third time that century.

William Pitt the Younger, who resolved the Nootka Sound controversy

What happened next was some sharp diplomacy on the parts of the British Prime Minister William Pitt and Spanish Prime Minister José Moñino. They were able to draw their respective countries into three agreements, known as the Nootka Conventions. The first, the Nootka Sound Convention, ordered Spain to restore to the British Crown all of its dispossessed Nootka sound holdings. The second, the Nootka Claims Convention, was the two parties’ agreement on a payment from “His Catholic Majesty”-the King of Spain- to Great Britain amounting to $210,000 as compensation for the incident.

The third Nootka Convention was the most pertinent to the question of whether or not Great Britain had any viable claim. Titled “Convention for the Mutual Abandonment of Nootka,” the meaning of this agreement was clear: neither the United Kingdom nor Spain were to lay claim to this little tract of land that had caused so much trouble ever again. It was still viable to them as a port and place to construct temporary buildings, but the convention specified that ultimately “neither of the said parties shall form any permanent establishment in the said port or claim any right of sovereignty or territorial dominion there to the exclusion of the other.”

This was where British exploration and settlement of the area ended. The Americans were just getting started.

In 1792, an American merchant named Robert Gray sailed into the mouth of the river which would later bear the name of his ship, the Columbia Rediviva. On November 7, 1805, Meriwether Lewis and William Clark replicated Balboa’s 1513 feat when they spotted the Pacific Ocean, a month later building Fort Clatsop on the Pacific Ocean, with the American flag flying over it. In 1810, John Jacob Astor established the Pacific Fur Company, bringing American private enterprise to the territory.

but more pertinent to the matter at hand, the treaty ceded all Spanish claims north of Alta California (the border of which was the same as the northern border of the present-day state of California) to the United States.

As we have seen, the Spanish claim to the area was fairly strong, I would venture to say the strongest, and in 1819 it was transferred to the United States. By the time of Polk’s election, there were ten Americans for every Brit in the territory and the issue had entered into the public mind. Allowing a continued British presence in land that should have been American was unacceptable to most Americans with an eye for foreign policy. Historical precedent, legal documents, and, on a more ideological level, the 1823 Monroe Doctrine, all rejected any British claim to the land. The Russian Empire was struggling to manage their Pacific Northwest colonies, which ultimately led to their sale of Alaska to the United States in 1868, so they did not effectively try to assert whatever claim they may have had to the land.

The land was rightfully American, and Polk made sure that this was undisputed. Soon after entering the White House, he resolved the issue with a permanent solution that is still in effect today. But That is a story for another time.

What happened to the natives of the Oregon region?

There was generally less animosity between natives and settlers in the Oregon territory than in many other parts of North America. This was partly owing to the sparse population of the area before British and American settlers arrived, as seen in this map of population density in pre-Columbian North America. The coast of the region was the most inhabited part, where the Natives initially interacted with Europeans. The Oregon tribes’ trapping expertise and knowledge of the area made them valuable trading partners, and the Pacific Northwest was an important source of fur for Europe and America. Later on, when settling… Read more »